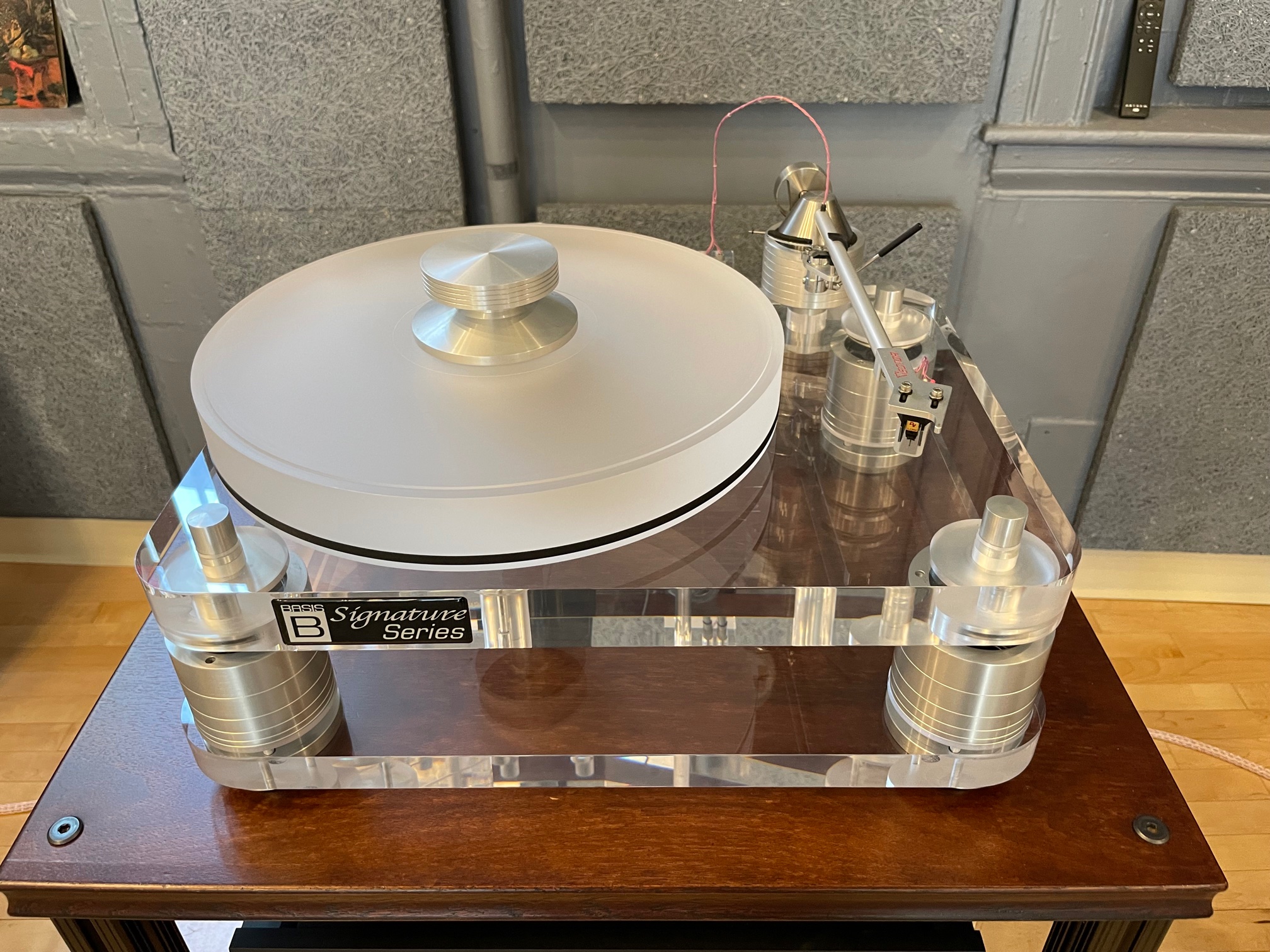 The 2200 incorporates an innovative adaptation of the Basis fluid damped suspension of the Debut model.  By incorporating the suspension under the turntable platform Basis has been able to reduce the size of the sub chassis, gaining an advantageous “thickness-to-length ratio” for improved resonant behavior.  We have named the suspension isolators “Resonance Annihilators” as they indeed perform the function of converting vibrational energy, on each side of the Annihilator, into heat energy.  The close proximity of the tonearm to the adjacent isolator is a great advantage of the 2200 over any other turntable design: tonearm energy, created as the stylus traces the record groove, is effectively and immediately eliminated by this close isolator.  The result is an immediate and direct sound, the hallmark of the suspended 2000 series turntables.

The 2200 turntable is the result of the same “Basis Systems Approach” of product development as other Basis products, where each individual subsystem contributing to the performance of the product is identified.  Specific goals for the performance of each subsystem are developed based on the function of that system.  Each system is designed, based on fundamental principles of physics, and then tested and optimized to perform its function to the highest level.  Only after each system has demonstrated superior performance at its defined function is it approved for use in the final product.  The result is a totally engineered product.  When looking at other products it can be obvious that the designer has “fallen in love” with a certain aspect of a product.  This may be a novel shape, a supposed isolator made of many layers of materials, or an unusual material.  Such shortsighted, incomplete designs are all too common in the record player field and result in one-dimensional performance.  With the Basis Systems Approach the buyer is assured of a complete design, a truly refined final product that will withstand the test of time by performing at a state of the art level for decades.

Isolating the turntable from the listening environment is crucial for you to really hear the music on your record.  Any less than total isolation reduces your turntable to an expensive tone control, with the sound becoming colored by feedback and by ineffective handling of energy fed into the turntable by the tonearm.

Additionally, the Basis system provides 48db greater isolation between the motor and the record-stylus system.  This means that the 2200 delivers musical details with 48db greater freedom from detail-masking motor noise than any non-suspended turntable system.

The beneficiary of this superior energy-conversion isolation system is the listener.  Musical details unfold with effortless certainty, conveying the emotion of the music with profoundly convincing realism, combining delicacy, immediacy, listenability, and explosive dynamics.

The sub chassis forms the base that holds all of the systems (drive, suspension, bearing/platter, tonearm mount) together.  Ideally the sub chassis should provide a rigid, non-resonant support for the turntable system components.  The stress-relieved acrylic 2200 sub chassis indeed provides such an ideal support.  As stated above, the compact length and width of the 2200 provides an advantageous “thickness-to-length ratio” for great resonant control and tightly couples the suspension to the tonearm mount area for greater vibration-quenching capabilities.  The 2200 sub chassis is closer to the thickness of the 2500 than the 2001, despite its price being much closer to the 2001.

The acrylic material is cast as a solid block and stress-relieved for stability.  The material itself exhibits superb low-resonance characteristics without the need for problematic damping with elastomer materials.  One needs only to cue the stylus directly onto the sub chassis on 2200, turn the volume up, and tap the sub chassis with various light objects such as toothpicks, small hex keys, small screwdrivers, and the like.  You will note that the sound from the speakers is different for each object and “sounds” like the material of that object striking acrylic.  Further, the sound is immediate and short without echoes, “overhang”, or ringing.  Such a simple test, performed with other sub chassis materials, will show the benefits of solid cast acrylic as used for a properly designed turntable sub chassis.

The 2200 Signature utilizes the most speed-stable type of motor available, the AC synchronous instrument motor.  Basis modifies this motor with a custom magnet assembly (see our Signature Series technical paper for more details) to further smooth the power delivery and to assure a totally balanced rotating system.

The custom motor is mounted in its own housing, separated from the turntable by elastomer isolators, which are themselves isolated from the critical tonearm/platter systems by the 2200 fluid damped suspension system.

The result of these extreme measures, along with the best drive belt in the business (See our website section on belts) is a totally speed stable, quiet, cog-free drive system.   Musical notes are unwaveringly solid, as expected; additionally, such exceptional levels of speed stability lend levels of coherence to the music and the recording soundfield that must be heard to be believed.

THE BEARING AND PLATTER SYSTEM

The 2200 bearing is a high-precision oil-well design, the smoothest, quietest turntable bearing type.  The final machining of the platter locating surfaces is performed after the bearing has been assembled.  The bearing therefore provides a perfectly centered support for the platter, contributing to the unwavering speed stability and the clarity of background and low-level detail of the 2200.  With the Signature Series, Basis took this advanced bearing to higher levels.  The fit of the new Signature oil-well bearings is of such high precision that the exact clearance is held to a precision of one ten-thousandth of an inch. (One ten-thousandth of an inch is .0001 inch, 40 times thinner than a piece of paper!)  You can spend five times more on other turntables yet you will not receive a bearing of this silence or smoothness.

Contrasted to the inexpensive inverted bearings that most new turntable designs incorporate the 2200 bearing is a great example of the Basis philosophy: quality is never compromised.

The 2200 platter is machined from a solid block of stress-relieved acrylic.  Its thickness, like the thickness of the 2200 sub chassis, is closer to the thickness of the 2500 platter than to that of the 2001.  You will note that even in two-dimensional images on the computer screen the massive nature of the 2200 is obvious.  The surfaces that mate to the bearing are derived from the Debut platter/bearing mating system.  A large horizontal diameter forms the vertical mating surface.  The result is undetectable vertical motion of the 2200 Signature platter as it rotates, meaning less woofer pumping and less amplifier strain.  The vertical motion of the rotating 2200 platter is equivalent to the thickness of a human hair or less.  The radial location is provided by a pair of concentric cylindrical surfaces, which provide superior accuracy to the ubiquitous tapered shaft so often seen in lesser products.  The superior radial precision of this fit forces the outer belt-driven surface of the platter to be perfectly centered, again guaranteeing the great speed stability of the 2200 Signature.

Armando "AJ" Conti, owner of Basis Audio and designer of the Basis turntables, realized his 18-year goal of producing an integrated record player system with the introduction of the original Vector tonearm. Ironically, before designing the first Debut turntable, as a professional product designer and part time audio dealer, his first product ideas and sketches were for a state of the art tonearm. Disappointment with the stability of available turntables led to the design of the now legendary Debut turntable, and Basis became a turntable company instead of a tonearm company. Over the next 16 years, evaluation of tonearms, experimentation to improve available tonearms, and new conceptual tonearm design work continued.

The Vector tonearm is the result of this evolutionary process, incorporating the same principles of engineering and physics that have made Basis turntables known and praised for their refined, natural, musical sound and neutrality. Also incorporated into the Vector tonearm is the legendary Basis precision and exacting execution of the fundamental design. The result is a state of the art tonearm capable of displaying the true potential of Basis turntables, and of conveying the nearly unbelievable layers of information, dynamics, and musicality that lay waiting to be discovered in the record grooves.